We have all heard the stories of the Ulunak, the night sculptors. Their kingdom was a verdant paradise of vast rainforests surrounding the range of weathered mountain peaks, and surrounded by saltwater marshlands. Countless stories have been told about their great city of marble and glass, carved into the eponymous mountain. We have all enjoyed the Unani fruit cordials from their jungle plantations and the bitter herbs that grow in their marshland domain. We heard of their great soldiers, clad in woven reed and wielding blades of bronze.

The Queen of the Ulunaki was slain a palace coup last night, along with her royal consort, and most of her children. Only the Queen’s youngest daughter was rescued from the massacre by unlikely hands. These unseemly folk bore the Heir to her aunt Baru who could offer refuge to the rightful queen of Ulunak. The Heir recounted the story of their escape to Aunt Baru, who listened with rapt attention. It wasn't until the end of their story that she let on about her suspicions…

This is a tabletop roleplaying game about the future queen of Ulunak, and the unusual figures who came together to escort her to safety. This is a game for 3-6 players which takes place over a single session of 3-4 hours.

Most of you will portray the Bearers, skillful and flawed adults who have chosen to escort the Heir to safety. You are a master of one of the six essential domains of the world; Warfare, Society, Sorcery, Religion, Nature, or Crime. To prove your value to the Heir and keep her safe, it is your job to warn of any dangers stemming from your domain. The Veteran may warn the group about an incoming patrol of soldiers, while the Shadow would point out that the kind guide is actually a con-artist. Bearers may also address threats, but doing so on your own Domain is likely to frighten the Heir. As a Bearer, your primary objective is to earn the Heir’s trust as you carry her to the safety of the aunt’s palace.

One of your number will play the Heir, daughter of the queen and the rightful ruler of the kingdom. The Heir is an innocent, compassionate young princess who has only seen a dozen winters. As the Heir, you facilitate the game and explain the rules. While you are but a young girl, each of her companions respects your potential as a leader and your word is final if ever a conflict arises. As the Heir, you watch your companions to judge if you trust or fear them. At the end of the game, Aunt Baru allows the Heir to decide the fates of each of the Bearers.

Palanquin is a game about a perilous journey and people trying to overcome their past. It’s inspired by classic indie roleplaying games such as…

Get exclusive access to this game by claiming while quantities last.

The normal copy of the game for those with the means.

For those individuals experiencing economic hardship.

Played this late last year with The Gauntlet, great fun and wish we had more time with it 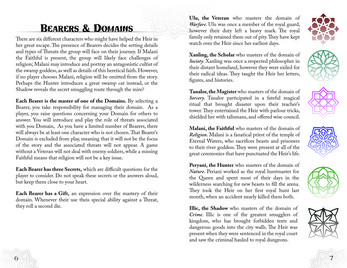