THERE IS ONLY ONE TRUE CITY

Sig is the nexus of the multiverse: a city connected to everywhere, a refuge for the oppressed, and a prize for tyrants. It’s a launching point, allowing fools and heroes to venture into the eternal planes of existence.

Want to try Sig out? Download a free Quickstart for Sig, which includes everything you need to run a one-shot session.

Chapter 2 is about creating compelling characters. Build your own freebooter, be they descended from planar heritages or immigrants from the prime worlds. Weave a web of connections and characters who bind the group together.

Chapter 3 describes the Eternal Planes of Existence, their inhabitants, and their supporters. Each plane has their own landmarks, native inhabitants, friendly Factions, and resident divine Powers.

Chapter 4 is the Atlas of Sig, describing the various neighborhoods of the city and the important people who represent them. Discover the Hive, where the destitute and the desperate struggle to survive; or the glory of Highspire, home of the mighty.

Chapter 5 speaks of the infinity of prime worlds, those familiar mortal realms. These include rules for collaborative world-building and a list of exciting worlds to explore, as well as 8 new prime worlds prepared by a roster of professional designers.

Chapter 6 provides other resources to run the game, including detailed examples of character creation and an example of play. This chapter also offers the Night Market adventure, exploring what happens when the Shard Realm of Empire binds to the City Between.

Sig focuses on collaborative narration and difficult decisions. When two participants propose different outcomes to a situation, each participant rolls dice, adding in bonuses if they have applicable Talents. The participant in the conflict with the highest score gets the desired outcome and must pay the Price of Victory.

Players gain Influence by confronting their Beliefs, and they use that Influence to shape the world around them and encourage each other to grow. As the player characters change, so too does Sig; the city’s tethers to different planes of existence shift and reorganize, changing the fundamental nature of the city itself.

Listen to an actual play podcast of Sig !

Listen to this podcast interview on the Modifier Podcast about aligning setting to mechanics, or this one on the Misdirected Mark Podcast where I describe the game.

Check out the free Sig quickstart,

Get exclusive access to this game by purchasing while quantities last.

A standard copy of the game. 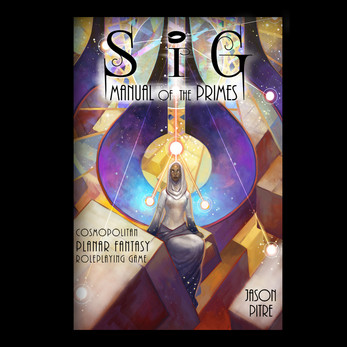